Intaglio printing, meaning “to carve” in Italian [1], has been around since at least the fifteenth century, although one could argue that the basic mechanisms of intaglio printing have been around the advent of cave paintings and art (Cambridge Dictionary). While the basic mechanism of intaglio has stayed the same over time, the art has evolved with advancements in the technologies needed to create intaglio prints. Due to the many possible techniques used to make an “intaglio print,” the term intaglio has become known as more of a genre or type of printmaking, rather than a singular type of printing. In its most basic form, intaglio consists of carving, etching or chemically removing pre-determined sections (or shavings) of metal from a metal plate. This basic result can be achieved in many different ways, with each different way effecting the style and aesthetic of the intaglio print.

In this paper I will be exploring one of the most modern forms of intaglio—color. After giving a brief history of intaglio as a print form, I will explore how intaglio color prints differ from their black and white predecessors, and what this means for the genre as a whole, as well as how it changes the experience for the viewer. After situating the reader within the broader context of color intaglio prints, I will analyze two famous prints that utilize the intaglio color print method. The first is Stanley William Henley’s “Witches’ Sabbath,” printed in 1956-57. The second, Krishna Reddy’s “The Great Clown” series, was printed in 1986 and was printed using “simultaneous process from a carved intaglio plate.”[2] In looking at these two objects, I will attempt to answer the following questions: Why print color intaglio? How does printing in intaglio change the medium? Why has color intaglio become a popular art-form? Lastly, I will comment on the shift from engraving, etching and other forms of intaglio used in the 20th century and before, to color printing, and what it may mean for intaglio as an art-form today.

A Brief History of Intaglio[edit] 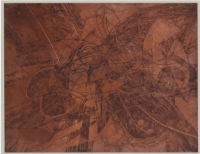 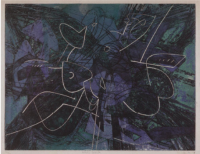 As I described above, intaglio consists of removing lines from a metal plate, generally a copper plate, either by engraving, etching or using various types of acids to eat away at the plate’s surface. This process creates crevices on the plate where ink will eventually be spread to fill said crevices. After the plate has been fully prepared, the artist prepares the paper by dipping it in water to dampen it. Next, they align the plate onto the intaglio printing press, and place the damp paper over top of it. Unlike common presses, the intaglio press does not “stamp” the ink onto the paper. Rather, the intaglio press rolls both the plate and the paper through two large cylinders, where a tremendous amount of pressure is exerted. This is because, unlike printing press, the paper being printed on needs to be pushed forcefully enough that the paper picks up the ink in the etched or engraved crevices. The Bureau of Engraving and Printing at the U.S. Department of the Treasury notes that it requires up to 20,000 pounds of pressure per square inch to adequately print using the intaglio method. [3]

Traditional forms of intaglio use only one type of ink, usually black, to create a print. However, the practice of using multiple colors (on the same print) in intaglio printing only began in the eighteenth century [4] The main difference with color intaglio printing is the application of multiple different colors. Unlike printers today, and much like painting, color intaglio allowed artists to play with the variation that came with layering different levels of different colors on their prints. This layering led to interesting variations in prints from the same metal plate, and a uniqueness to each print. For example, artist Jacques Villon would create color prints by creating three identical plates. Villon would then ink only the sections of each plate that he would want in each specific color. For example, on the first plate he would only ink the parts that he wanted blue, in blue, etcetera. Once printed, the overlap would create different hues, and the use of the varying use of depth of the incisions made in each of the identical plates could make one color dominate another (in the overlapped areas).[4] Other methods, such as putting all the colors on a single plate, create different effects in the resultant print, and allow for a lot of variation as an artistic form.

The earliest instances of print intaglio was in single color prints used in illustrations in books [4], and thus has historically been used as a way to reproduce images that convey information. [4][2] In the fifteenth through seventeenth centuries, engraving (that is, the process of using a sharp object to ‘engrave’ into a hard surface) were used to decorate “metal plates, armor, candlesticks, jewellery and articles of precious metal”. [2] This form of engraving (engraving as decoration, as mentioned above) is the same basic technology used in intaglio, but was used in other instances before being used to create intaglio prints. Once the printing press was widely used, intaglio printmaking was used to enable mass-reproduced images in books. These illustrations were mainly in traditional black-and-white intaglio, since color printing was much more labor and time intensive as well as costly. However, artists began using the same mechanisms for intaglio to experiment with color printing. Artists began creating color prints starting in the sixteenth century.[2]

Color printing has historically been used as a way to reproduce images and in turn convey information.[2] In the fifteenth through seventeenth centuries, engravings were used to decorate “metal plates, armor, candlesticks, jewelry and articles of precious metal”.[2] Once the printing press was widely used, intaglio printmaking was used to enable mass-reproduced images in books. These illustrations were mainly in traditional black-and-white intaglio, since color printing was much more labor and time intensive as well as costly. However, artists began using the same mechanisms for intaglio to experiment with color printing. Artists began creating color prints starting in the sixteenth century.[2] 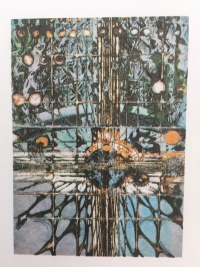 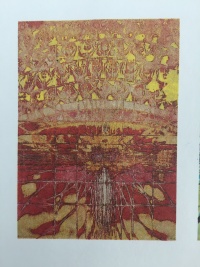 The two prints that I will be analyzing are “Witches’ Sabbath” by Stanley William Hayter, and “The Great Clown” by Krishna Reddy. Both were created in the twentieth century, 1952 and 1986 respectively. Both prints employ a color print technique called viscosity printing, where the artist uses acid to create different depths or layers of etchings (these layers are used to create different strengths of the colors used in the print).[2] Moreover, the discovery of linseed oil in color printing largely solved the unpredictability of placing multiple colors on a single plate.[2] As Reddy explains, using raw linseed in-between layers of differing colors allows the bottom, drier layer to better absorb the top layer of ink being applied to it. He notes that, “Combining this modification of inks by raw linseed oil, with an understanding of viscosity and tackiness of inks, aids in realizing clarity and richness of color in the prints”. [2] Reddy experiments with this technique in his series, “A Great Clown,” each version resulting in a drastically different print, all from the same metal plate.

As you can see from three prints from the series (pictured above), the general structure underlying engraved lines are the same, but the use of colors creates a vastly different experience for the viewer. This series, and intaglio in general, brings into the question the concept of reproducibility and when does something count as a “copy” of something else. In their most basic form, each of these pieces is identical. The lines and grooves of each are exactly the same, and the same tool (the metal plate) was used to create the print. However, the addition of color makes it hard to argue that these pieces are identical, as each invokes a completely different feeling in the viewer.

This series brings to the forefront a question art forms like intaglio, woodcutting, and even printing, face: how do you define reproducibility? Is it the underling structures of a piece that make it unique? Is it visual aspects of the piece that differentiate between copies? Or is it the experience of the viewer? What Reddy’s series seems to suggest is that unlike other, more exact, technologies, intaglio printing is more than the engravings or etchings on the plate. With color intaglio specifically, the use of color force the viewer to expand their conception of “copy” to differentiate between physical (lines in the metal plate) and visual (use of color) differences in different prints.

The second piece I will look at is “Witches’ Sabbath” by Stanley William Hayter. As Liza Folman explains in her article, “Stanley William Hayter and Viscosity Printing,” viscosity printing allowed for different levels of “bite” in the metal (Folman 23). Bite in this instance, is the depth of the crevices worked into the metal plate. Hayter was particularly passionate about ensuring that there was no mixing of colors in his color prints, and mixed different viscosity to account for this possibility. As the images below show, it is possible to see the different levels of bite even in the copper plate itself. For instance, Figure 4 has large, thick lines going from the top left corner, leading into two half ovals near the bottom left corner. These lines are so deep that as can be seen in Figure 5, ink did not even transfer onto the plate from those lines. Once the print is complete, it is possible to see the difference in level, which creates depth in the piece. By experimenting with different levels of bite in this piece, Hayter was able to visually represent what is actually occurring to the metal plate as it is manipulated, differentiating his work from other more traditional forms of intaglio printing.

Both “Witches’ Sabbath” and “The Great Clown” series employ a popular method of intaglio color printing in the twentieth century. It is evident from the prints analyzed here that color printing does not serve the same process as black-and-white printing. Color printing is much more laborious than traditional intaglio, and is often used as a form of artistic expression rather than purely to communicate information. In addition, unlike black-and-white printing, the possibility of variation between individual prints is much higher due to the need to combine multiple colors, and the relative unpredictability of how the colors will mix together on the page.

Overall, it could be argued that the original purpose of intaglio (commercial mass production of images) is no longer widely used since the advent of the printer and computer. However, color intaglio printing is able to display levels of depth (different hues and tones of ink) that a color printer cannot. So while it may not be used for commercial use in the future (similarly to how common press printing is no longer used commercially), it is sure to continue thriving within the artistic community.