The binding of a book can provide an incredible amount of information as to its intellectual purpose, historical and cultural context, as well as its ownership. It is simply a matter of knowing how to study a book’s bindings. This paper will focus on two books— Fromont Jeune et Risler Ainé (PQ2216 .F8 1924) and Twenty Years of Congress/Biography of James G. Blaine (Zinman 146)—in an attempt to narrow this broad topic and answer two questions, namely: what type of meaning can decorative bindings create for books? And what kind of reading do they encourage?

In order to better understand the implications of decorative bindings, it is important to first understand the origins. of ornamenting the covers of a book. A method known as “stabbing” would lay the foundations of decorative bindings. It was a process in which cords were threaded through two or more holes that had been pierced near the inner edge. Often done for books of paper or papyrus, these cords would then be laced together. The main obstacle with this method was that the book did not open very well as the cords took up much of the inner margin. However, this practice of covering the sides and spine of the book, mainly to protect the book from time and wear, “laid the foundation of ornamental bindings." [1]

One of the earliest examples of binding a codex was discovered in 1875. 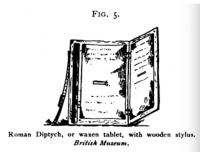 Made in A.D 55 Pompeii, a collection of small wooden tablets hollowed out on one side and filled with wax were found. Known an “pugillaria” or “diptychs,” they would sometimes include two or more leaves that were bound together by leather tongs or rings. In this way, they resembled the structure of the modern book. Around the 3rd-6th centuries, diptych covers became more ornamental, often made of richly carved ivory as well as including portraits of the Roman consuls who ordered them.

Some of the first instances of decorative bindings being used to denote meaning occurred in the East, such as India and China. Palm leaf books, kept together by ornamental cords, were found to have their upper covers decorated by worshippers with pieces of red pigment.[2] We begin to see how bindings can be used to set apart certain works in terms of importance and content. In the modern day, bookbinders would often look inside the book for illustrations as inspiration to create a fitting cover. The content and purpose of the work becomes closely tied to the physical binding of the book.

Both the material of the binding as well as how the cover is designed create a layer of meaning that hints towards the “social and intellectual aspirations of the text”. [3] Books can be bound by many different materials, such as silk, canvas, velvet, and vellum. Each binding material obviously holds different values, whether it be cultural or economic, and these varying values then gives each book a different value. For example, velvet with an embroidered heraldic design was often used for royalty.[4] Embroidery contained four different classes of decoration: heraldic, figure, floral, and arabesque. Heraldic often denoted ownership, while figure designs contained three different classes of its own: scriptural, symbolical, and portrait. Scriptural depicted representations of people from the Bible, such as King Solomon and the Queen of Sheba. Symbolical designs pictured figures of abstract concepts such as “faith,” “hope,” and “peace.” Finally, portraits depicted people of history, such as Charles I, the Duke of Buckingham, etc. We can see how a book’s binding may have hinted at what the book would contain contextually depending on the type of embroidered design. 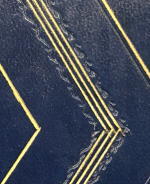 Before embroidery, in the earliest leather bindings in both the East and West, the most common way of decorating a cover was blind tooling. This was a method in which metal stamps and tools were used to create impressions on the leather book covers. After a while, Arabic binders began supplementing these designs with gilded patterns which is known as gold tooling. In the image to the left, an example of blind tooled designs can be seen bordering the gold tooling.

Gold tooling entered Europe through Italy and Spain, which were countries close to the Middle East where Arab binders had been using this method for quite some time. This technique is done by pressing gold leaf and sticking it to the book through adhesives. How then, might we look at books with gold tooling versus a book without? What kind of implications can we gather from heavily decorated books and those that don’t have any ornamentation at all? These are the questions that are explored by observing the first book, Fromont Jeune et Risler Ainé.

During the first three centuries of printing (up until the 19th century), many books were sold unbound or with short-term bindings. And so, it was up to the owner to choose a more permanent binding. This choice of binding, to the modern eye, would then reflect both the “status and intellectual taste of the owner” as well as the “status accorded to the individual texts."[5] An interesting extension of this practice in the present is the customization of ePubs, as readers can change "structure and paratext through font, font size, font and page color, and many other elements" that afford them a different reading experience, much in the same way that readers in the past would alter books through characterized bindings.

What type of meaning can decorative bindings create for books?[edit]

In observing the University of Pennsylvania Kislak Center’s edition of Fromont Jeune et Risler Ainé, we can see that it is covered in quarter calf leather and includes marbling and speckled with gold. The gold tooling on the spine is done artfully and appears to be hand bound with raised cords. Simply from looking at the visual aesthetics of such a book, one can see the care and value that was given in creating this binding. Fromont Jeune et Risler Ainé was written by Alphonse Daudet, a French author who lived from 1840-1897. Daudet, before this book, had written several failed pieces such as Les Aventures Prodigieuses de Tartarin de Tarascon and L’Arlésienne. However, Fromont Jeune et Risler Ainé was the “dawn of his popularity,” winning a Jouy Prize from the French Academy and established him as a credible writer in his time. [6] The novel was then published in many editions—some for the library, others cheap enough to be sold on the streets, and still some that were in expensive form.

How do these different editions begin to construct meaning for Fromont Jeune et Risler Ainé? How would I read an edition that is wrapped in clear plastic and kept in the Kislak Center differently than I would a paperback edition I had bought off the streets? The content remains the same and yet the way the book is handled and regarded is incredibly different. One might attribute more value to the Kislak edition—with its gold speckling and leather cover. Along with this sense of value may come more believability and trust in both the author and the content. There has to be a reason why so much care and expense would be given to a book. There is a sense of permanence and heft that comes with such bindings that then translates into how the reader perceives the very content of the book itself. In a physical sense, a book bound in leather lasts longer than a book of paper. This physicality then translates into the mental and emotional handling of the book. We can look at how the book's physical binding guides the owner in its presentation. This edition of Fromont Jeune et Risler Ainé has an ornate spine and rather beautiful but plain, flat front and back covers. How does this inform the owner in how the book should be stored? Because the book's covers are flat, it means that the codex can be placed easily among other books on a shelf and because the spine has been carefully designed, it seems to imply that the book should be placed in a shelf with its spine faced outward. This is not a book that should be placed on a podium, as many ornately decorated religious texts are displayed. Rather, while this book has been given a sense of importance, it can still be effortlessly picked out and handled in the hands of the user. A book meant to be treated. carefully but still read easily. From simply the way the book was bound, meaning in the sense of importance and treatment is created.

What kind of reading does decorative binding encourage?[edit]

When given the dos-a-dos to look at in the Kislak Center, I was presented with the side that was titled Twenty Years of Congress. Already, a question of reading with the dos-a-dos structure is brought up. If I had been presented with the other side (Biography of James G. Blaine) first, how would I have read and interpreted the text as a whole differently? I would perhaps have thought of the content in a more supplementary sense to the person of James G. Blaine. That the work was meant to support his life story rather than his life story being background to the information he writes in Twenty Years of Congress. The aim of Twenty Years of Congress is to “separate the valuable and permanent from the valueless and transient and to give a connected account of the really great events in the Senate and House of Representatives” [7]

Images of Twenty Years of Congress...Biography of James G. Blaine

The very structure of the dos-a-dos informs the aim of the text. The dos-a-dos attempts to give a “connected account” by supplying both the author and the work of the author in one codex. It encourages this idea of compiling and combining information by providing a deeper look at topics that relate to each other and would otherwise not be so easily accessible. In a way, it resembles the modern-day hyperlink. Imagine searching up Twenty Years of Congress on Wikipedia and seeing that it is written by a man named James G. Blaine. Most likely, his name would be highlighted in blue and clickable. If you were to click his name, it would lead to a completely different page devoted to outlining information about James G. Blaine. In the same way, this is done in the dos-a-dos by combining two books in one. The kind of reading that accompanies this book is one of scholarly approach. That is, this book implies a type of reading that is more for research or learning than for simple enjoyment.

Decorative bindings not only sheds light on the historical and social context and purpose of the book and its author but it also shapes the way present day readers handle the books now. Binding is a physical attribute of a book that can influence the mental consumption of its text. Humans are tactile creatures and the way we interact with physical objects will change the way we perceive them. It is important to learn how we are influenced in such ways so as to properly understand the texts from long ago and to look towards the future in the books we produce now.